These are challenging times, and we want you to know that our first priority is to make the series a safe experience for everyone.  This is a fluid situation and we will make changes as appropriate.  In the meantime, we are planning to hold live events with the following protections: 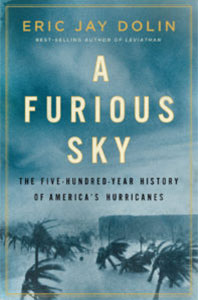 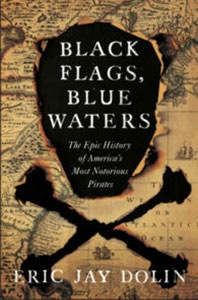 Black Flags, Blue Waters: The Epic History of America’s Most Notorious Pirates recounts tales of the more flamboyant pirates – including Blackbeard, Captain Kidd, and Edward Low – who patrolled America’s shores from the late seventeenth century through the early eighteenth century. The Wall Street Journal said that Black Flags, Blue Waters is “an entertaining romp across the oceans….” The book was chosen as a “Must-Read” book for 2019 by the Massachusetts Center for the Book. Furious Sky: The 500-Year History of America’s Hurricanes (to be published in August 2020) is a review of the hurricanes that have ripped across America from the earliest times. Publishers Weekly said that Furious Sky is a “fast-paced and informative history of American hurricanes from the 16th century through the 2017 season.”

Eric Jay Dolin is the author of fourteen books, including Leviathan: The History of Whaling in America, which was chosen as one of the best nonfiction books of 2007 by the Los Angeles Times and the Boston Globe, and also won the 2007 John Lyman Award for U.S. Maritime History. Eric is a graduate of Brown, Yale, and MIT, where he received his PhD in environmental policy.

Descriptions and reviews of Eric’s books can be found be found on ericjaydolin.com. 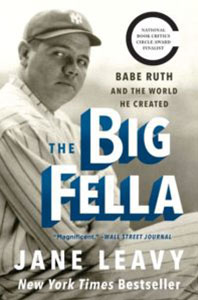 The Big Fella provides a new perspective on one of America’s greatest sports figures. Using a barn-storming tour after the 1927 season (when he hit a record-setting 60 home runs), Jane Leavy traces the emergence and impact of the New York Yankees’ Babe Ruth on baseball and the world at large. The book was a New York Times best-seller, received numerous awards, and was hailed as a Best Book of the Year by the Boston Globe, Publishers Weekly, and other publications. Forbes magazine called The Big Fella ” a major work of American history by an author with a flair for mesmerizing story-telling.”

Jane Leavy, a former staff writer for the Washington Post, has written best-selling biographies of two other baseball icons: The Last Boy: Mickey Mantle and the End of America’s Childhood, and Sandy Koufax: A Lefty’s Legacy. Her articles have appeared in numerous publications, including The New York Times, Sports Illustrated, and Newsweek. Jane is a graduate of Barnard College and the Columbia University Graduate School of Journalism, where she wrote her master’s essay (later published in The Village Voice) on Red Smith, the late The New York Times sports columnist and one of Jane’s childhood heroes. Descriptions and reviews of Jane’s books can be found on janeleavy.com. 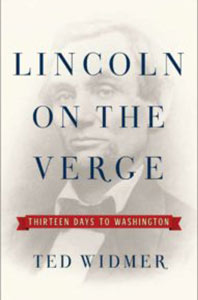 Lincoln on the Verge tells the story of President-elect Abraham Lincoln’s train ride in February 1861 from Springfield, Illinois to Washington, DC, where he will be inaugurated as the 16th President of the United States on March 4. Drawing on new resources, the book provides an in-depth look at the newly-minted leader as he struggles with the challenges of a divided nation – and an assassination plot that will greet him in Baltimore. The Washington Post called Lincoln on the Verge “superb,” adding that, with so much written about Lincoln, “it’s rare when a historian discovers an episode in his life that, if fully developed and interpreted, yields important new insights. Ted Widmer has done just that…” And Ron Chernow, Pulitzer-Prize author of Grant and Hamilton, said that, “with stunning verve and you-are-there immediacy, Ted Widmer evokes the thirteen-day journey of president-elect Abraham Lincoln from Springfield to Washington” in a book that is “loaded with high drama, danger, and plentiful suspense…”

Ted Widmer is a Professor at the Macaulay Honors College in the City University of New York. He is a former speechwriter for President Bill Clinton as well as Secretary of State Hillary Clinton, and the former Director of the John Carter Brown Library at Brown University. He has written or edited a number of books about American history, including Listening In: The Secret White House Recordings of John F. Kennedy. 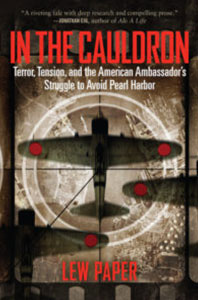 In the Cauldron: Terror, Tension, and the American Ambassador’s Struggle to Avoid Pearl Harbor recounts the untold story of American Ambassador Joseph Grew, who tried to orchestrate an agreement between the United States and Japan in the months before Pearl Harbor, and, when he saw those efforts would fail, tried to warn President Franklin D. Roosevelt that Japan was prepared to launch a suicidal war against the United States. Jonathan Eig, author of Ali: A Life, said that In the Cauldron “tells one of the great overlooked stories of World War II” and that Lew Paper “delivers a riveting tale with deep research and compelling prose.” And Richard Moe, author of Roosevelt’s Second Act: The Election of 1940 and the Politics of War, said, “Just when we think we understand all there is to know about Pearl Harbor, along comes Lew Paper with a riveting and superbly researched tale of the American Ambassador to Japan, Joseph Grew, struggling to get word to Washington that an attack could be near.”

Lew Paper has authored five other books — John F. Kennedy: The Promise and the Performance; Brandeis: An Intimate Biography; Empire: William S. Paley and the Making of CBS; Deadly Risks (a novel revolving around the assassination of John F. Kennedy); and Perfect: Don Larsen’s Miraculous World Series Game and the Men Who Made It Happen. Lew’s articles and book reviews have appeared in a variety of publications, including the New York Times, the Washington Post, The New Republic, and The American Scholar. Lew is a former Adjunct Professor at Georgetown University Law Center and a former Teaching Fellow in Government at Harvard College. Descriptions and reviews of Lew’s books can be found on lewpaper.com. View the video trailer for In the Cauldron: https://www.lewpaper.com/in-the-cauldron-by-lew-paper-60

Breakfast: 8:30 am, featuring the Chef’s Breakfast Buffet with multiple choices of hot entrees (including eggs with bacon and sausage), cereals, yogurts, fruits, a variety of breads, juice and coffee.
Lecture: 9:15 am
Book Signing to follow